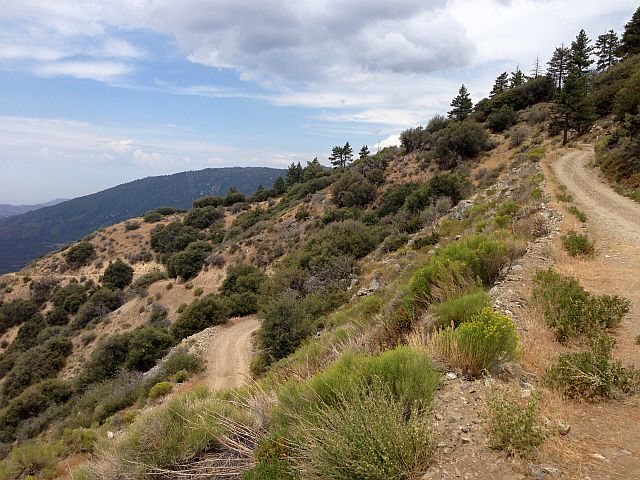 Best known facts of Radford Road date back to the 1800.  Here is some info I got about Radford and Converse Station. This is a cut and paste from my Forest Service heritage officer contact:

“I did a quick map survey and here is my initial view on the subject. I expect that there are written records for the area, but I do not have any at the moment. Please look over the survey and we can go from there.

Casual Map Survey Converse/Camp Radford area.
Currently Converse Station sits in the Converse Flats (north of the Santa Ana River). It is reached by a paved road off of the Seven Oaks Road near the intersection of Glass Road and Seven Oaks Road. The paved road continues to the north to Camp Radford – a City of Los Angeles owned and run camp. South of Camp Radford and to the east of the Station is Camp Sky Meadows – a youth camp on private property. South of Sky Meadows is a patch of private property. Just north of the Station Forest Road 1N04 runs east-west from the Santa Ana River and SR38 to 1N54 (Clark’s Grade).

I do not recall any mention of the Radford Truck Trail 2N06 in Saga of the San Bernardinos or Robinson’s several books.

2N06 (Radford Road) runs from the current Converse Station north up the Converse creek drainage. It then turns east and traverses up along the slopes that make up the west side of Staircase Canyon and then swings north and west to join 2N10 behind Bear Mt and Snow Summit Ski areas.

The 1899 maps shows a trail from the Pines (modern Seven Oaks Housekeeping Cabins of Dorner fame) running up the Converse drainage and the climbing up the west slopes to Grand View on the ridge top and then straight north to Pine Lake (later Pine Knot/BigBear). This I believe is the mule trace that is mentioned as the primary route from the Seven Oaks area to Big Bear in the late 1800s and early 1900s. Roughly along the modern mountain bike Seven Oaks Trail. It has been argued that this route follows older Indian trails from the acorn-gathering areas of the Santa Ana valley to the higher valleys.

The 1925 Angeles/SBNF map shows Camp Radford and the Converse Flats Ranger Station and a road to Camp Radford and two alternative trails going north up the ridge to Pine Knot. It also shows a minor road from Pine Knot up Rathburn Creek to the area of Bear Mt Ski. This map does not show any thing where 2N06 runs.

The 1938 grazing map Shows the Converse Flats Guard Station and Camp Radford as well as the trail(s) to the north. It shows a road looping to the west from Converse station to the Seven Oaks road and it shows a road running north and west from Camp Radford that joins with a road in Rathburn Creek. This would seem to be the Radford Truck Road.

The observation that suspected 2N06 is not on the 1925 map but is on the 1938 map; added to the fact that Converse station was the home of the CCC Maintenance facility, leads me to believe that 2N06 Radford truck Road was probably an early CCC project. I would need to find an early 1930s map to narrow the dates.

Since Camp Radford is a City of Los Angeles property, I expect that the City Historian and various departments will have some records, including ground plan maps.

The 1954 USGS map shows the current 2N06 route, but does not show any thing that can be equated with 1N04 west of the Converse station. To the east it shows the Radford Frontline Road.

The above is just a quick map survey. I would be interested to see anything anyone else comes up with on the actual dates and historical moments for Converse (Convers) Flats and the local roads and trails.”  End of survey.