Dana Weber
“The Big Bear Grizzly is an awesome course with plenty of great single track and a really hard climb at the end. It’s the best endurance race course there could be in SoCal and I wanted to race for the win. I rode well and was with the leaders about a third of the way, but had a slightly off day combined with some hydration / stomach problems that caused me to blow up at the end. It was pretty bad and I went up the final hour long climb about 12 minutes than I did the week before pre-riding it at a tempo pace… I had a lot of mixed feelings after the race, disappointed with my result, satisfied that I raced for the win and just didn’t have it that day, and thankful to be in the mountains doing what I love. It’s a great event with a good balance of laid back grassroots feel, while well organized and plenty competitive at the front of the race. The start and finish is right at the heart of the Big Bear Village which is great and I highly recommend the ride / race for next year.” 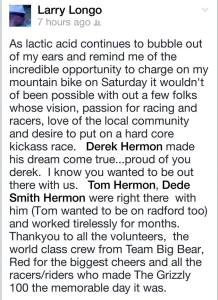 Comments from Our 2015 Rider Survey

“I want to personally thank Lauren for her help and assistance this past Saturday during the Terrible 10000 I took a bad spill early in the ride descending into the Angeles Oaks area. I was first concerned I may have a concussion, but tried to continue. After having difficulty riding the single track trails, I realized I was in big trouble and decided to call it quits at rest stop #3 near a paved road. After being evaluated Lauren was kind enough to drive me and another downed rider into town to the emergency room. After several tests and hours had passed, Lauren returned to keep me company. She was there when the news came I had to be airlifted down the mountain and offered to drive my van to her house. I’m forever grateful for everyone’s assistance and look forward to riding with you all again soon. Thanx Again, Chris”

“I didn’t cramp and have to walk up Radford, probably because the climb up Radford happened earlier in the event”
“Better course and really well laid out and stocked feed zones!”
“Even more single track. What a blast!
“Great to see the event getting bigger.”
“A lot more festive and supported.”
“Weather not as hot as last year.”
“Way better course.”
“Race better suited to cross country full suspension.”
“Happy”
“Smashed a link and had to remove it with a chain tool. Another racer gave me a master link. Thanks, dude”
“It is a good ride, great terrain, well run with plenty of food and water stops.”
“People are really nice up here”
“Love the area and the community!”
“The Grizzly actually kicked off a week long Big Bear Cycling Festival. I stayed the whole week and did a tone of rides an events, both road and mountain. They even had a specific recovery ride the next day with free lift tickets up Snow Mountain, and they had an organized MTB ride the day after that with lights to lend. It was a great week and they didn’t already they should encourage others to turn it into a weeks cycling vacation.”
“It is awesome up at Big Bear and we plan to go back.”
“The race venue was very nice.”
“Skyline and all the trail in Big Bear were fantastic”
“Killer event venue. Love the town of Big Bear Lake and thought the trails were amazing”
“Love the belt buckle. Love the t-shirt.”
“I was so tired that immediate after the race I went back to my vacation rental took a shower and had a beer.”
“Fun course overall, good rolling singletrack in two long sections, one very long double track climb, since there were not a ton of riders in the race, there were never any ares which became congested or dangerous with too many riders.”
“I thought the 100k course was awesome. The climbing was open and painful and the amount of single track was awesome.”
“I like that this course was varied and had plenty of very thing. It didn’t have much road though except the start and finish which were on a hill and I prefer the road there. The few miles in the middle which was undulating like many country roads. Races never have enough moderate climbs (which I’m good at!) What I didn’t like about the Grizzly was the Radford Climb, but that’s the same part that makes the event extra special! No sane person would like that.”
“Instagram would be nice.”
“Best marked, best supported course ever ridden.”

The aids stations were the best I have ever seen. I just raced in the Breck 100 two weeks earlier and their aid stations were a disappointment compared to yours. I would like to see more coca cola at all the aid stations, it seemed only a few had it but I might not have asked for it. This was a perfect event! Putting that Radford climb at the start of mile 52 tested my fortitude and that is why I race (chase) these endurance events. I will be there next year! AND the belt buckle was the icing on the cake!

Best supported race that I have been to EVER!!!

I was surprised at the energy of each feed station and the speed at which they attempted to provide items to racers in the open race, or anyone at the station.

Love my Grizzly buckle! Why travel to Leadville to chase a buckle with 2500 other chasers when you can compete in a quality event like the Nue series?

They were generously stocked with the best food and products on the market. In fact, they could have fed a bear! A Grizzly bear that is! You even had chain lube! Wow! Your aid stations proved to me that this event was about the racer and not being stingy to save a buck. Your actions speak louder than words. Focus on the aid stations and you will never lose a racer to another organizer.

Truly one of the best long distance courses I have done. Aid station volunteers were awesome!!!! Please tell them many thanks.